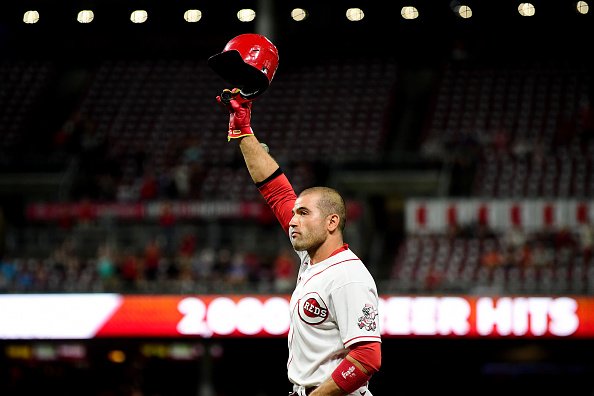 Canada has produced a plethora of MLB talent over the last two centuries. Many fans of the American pastime would be surprised at how many of their favorite players were born in Canada. More than 200 Canadians have made their mark on baseball. That includes two Cy Young Award winners, three MVPs, four batting titles, 11 Silver Slugger Awards, 13 Gold Gloves, 16 World Series titles and 49 All-Star selections. Fergie Jenkins became the first Canadian to be enshrined in the Baseball Hall of Fame, and was joined by Larry Walker years later. Now, with Joey Votto breaking the record for most games played by a Canadian recently, it’s worth looking back at other Canadian players who had long careers in the majors.

Most games played by Canadians

Joey Votto is one of the best baseball players in Canada. The 38-year-old set a new mark for most games played as a Canadian, surpassing Hall of Famer Larry Walker. Votto has played his entire career with him Cincinnati Reds. After being drafted by the Reds in the second round of the 2022 MLB Draft, Votto first appeared for Cincinnatti on September 4, 2007. He is a 6-time All-Star with 342 Home Runs, 1,106 RBI and 2,093 hits. In addition, the first baseman won the NL MVP in 2010, a Gold Glove in 2011, and led the NL 7 times in On-Base Percentage. With two years remaining on his contract with the Reds, Votto will likely be the first Canadian to play in more than 2,000 MLB games.

Larry Walker made his Montreal Expos debut on August 16, 1989. The native of Maple Ridge, British Columbia, played in 17 seasons with the Expos, Colorado Rockies and St. Louis Cardinals. He made his first All-Star team in 1992 while winning the first of seven Gold Glove Awards. Between 1995 and 2003,
Walker was a four-time All-Star, a three-time Silver Slugger, and the NL MVP in 1997.

What set Walker apart from other hitters of his era was hitting ability. Walker led the league in average three times, slugging percentage and OPS twice. After retiring in 2005, Walker waited until his final year on the ballot to become the second Canadian to be inducted into the Baseball Hall of Fame. As someone who didn’t start playing baseball until he was 16, he has left an unrivaled legacy in the game.

Justin Morneau played for the Minnesota Twins for most of his career. After being drafted by the Twins in 1999, he made his debut on June 10, 2003. Morneau became the first Twin to hit 30 home runs in consecutive seasons, the first since Gary Gaetti in 1987-1988. The four-time All-Star was named the American League Most Valuable Player in 2006 while winning the 2008 Home Run Derby. He won two Silver Slugger Awards and represented Canada in the World Baseball Classic in 2006, 2009, 2013 and 2017. He was inducted into the Twins Hall of Fame in 2020, as he currently serves as a special assistant in the Minnesota front office.

Terry Puhl made his first major league start for the Houston Astros against the Dodgers on June 12, 1977. The Saskatchewan native hit .301 in 60 games while earning a starting role in 1989. The outfielder was a staple in the Astros’ defense throughout the year. 1980 In his career, Puhl hit .280/.348/.388 with 62 home runs and 435 RBIs. Puhl hit a career-high 13 home runs as he was a constant contributor to the Astros for the next decade. In more recent years, Puhl has served as the coach of the Canadian national team.

Jack Graney had an interesting path to the big leagues. Fellow Canadian Bob Emslie spotted the St. Thomas, Ontario native and convinced the Chicago Cubs to sign him. Finally, Graney made his debut on April 30, 1908, with the Cleveland Naps as a pitcher. When he returned to the majors in 1910, he transitioned to left field. Graney was the first batter to face Babe Ruth on July 11, 1914. He was also part of Cleveland’s first World Series victory in 1920. Following his playing career, Graney was the first former player to have a career in broadcasting.

Jeff Heath became a powerful prospect. The native of Fort William, Ontario, made his debut for Cleveland on September 13, 1936. However, his debut was overshadowed by Bob Feller, who struck out 17 batters in that same game. Heath’s 1938 season was his great campaign. That year, he finished second in the American League batting career (.343) and recorded a league-leading 21 home runs, 112 RBIs and 18 triples. In 1941, he became the first American League player to hit 20 doubles, 20 triples, and 20 home runs in the same season.

Jason Bay played for his hometown team in the 1990 Little League World Series. The Expos selected Bay in the 22nd round of the 2000 MLB Draft. Bay, a native of Trail, British Columbia, made his debut with the San Diego Padres on May 23, 2003. Bay was traded to Pittsburgh, where he would play until 2008. He excelled with the Pirates during that time, hitting 30 consecutive home runs and 100 RBI seasons in 2005 and 2006. He was also great defensively, finishing second among NL left fielders in assists. Bay is the first and only Canadian to win the National League Rookie of the Year award.